How I LOATHE the Button Straddle

Why?  Let me spell it out.  It takes any game and forces it to play 1 level higher, without the stacks.  For example, in a 1-2 game the button straddle is $5.  So, you are playing a $2-$5 game, but the buy-in is only $200 max.  So, you are forced to play a bigger game against stacks that have accumulated at the table with only 40 BB.

Yes, that REALLY bothers me.  It changes the game in that the table play is looser, but most of the time the loose play is unjustified.  Worse, if you are not getting cards, you bleed chips relatively quickly.

Here is a scenario.  You see some flop (at $5-$10 each) and miss EVERYONE and have to refill even though you have NOT LOST A HAND.  The stack to your left is $800 and ALWAYS button straddles and often raises it.  So, a new girl on his left limps.  I look down at 88 and its a perfect place to see a 4-5 handed flop.  I limp too.  The button makes it $20 to go and then the UTG girl, who is being tricky with QQ, re-pops to $45.

The flop was A8X.  Figures.

But my point is that the people building big stacks (and another guy was stuck $400 before he won a pot and started to build a stack) are doing it getting their money in with total disregard for EV.

Conclusion: Its a donk-fest only you dont have the usual edge you would at said fest.  Your best bet is to build a stack fast, but if you keep getting "see a flop hands", you had better hit a few of them.
Posted by columbo (at eifco dot org) at 9:37 AM 2 comments: Links to this post

Poker and Football (NFL that is)

Why do I love football so much?  Because I am constantly amazed at the Xs and Os of it. The coaches and their game plans and the scheming are riveting to me.

I approach poker tournaments like an NFL coach.  I have a game plan based on the structure and then call plays based on the situation.  This is probably why I am a tournament player vs. a cash player.  I put the situations first and try "reads" on a player second.  (I do the reverse if playing cash).

So, I was sort of bemused last night when a comment was made about my play style.  We have 12 players, so it becomes an extended SnG.  Short-handed, then full table, then returning to short handed.  I for one love short-handed play in this situation.  But apparently someone had been stat-hunting and made a comment that I am not aggro enough to be good short-handed.  I found that intriguing.  (I still think being aggressive at 6-max is over-rated.)

In a 6-max tournament, you really have to open up your starting hands and fight a bit harder for pots.  But I am not a believer that you simple change out your game-plan styles for 6-max.  That's debatable I know.  But in a 12 person home-game, there is no comparison to a full field 6-max tournament.

My game plan for this more SnG situation is simple.  (Nods to Jen Harman here).  No Limit is a game of trapping.  With big stacks and big fields, you are trapping post-flop.  In a smaller field with smaller stacks, I am more likely to utilize the Phil Hellmuth method of trapping.  Pre-flop raises, laydowns to re-raises, until you cultivate situation where you think you have gotten an edge pre-flop.

Sure, at one point with 5 or 6 left (this hand will be OMM e107) I had to lay down what turned out to be the best hand (although I still outlasted that player to get to the chop at the end).  But more often, I was trying to play big pots with my big hands pre-flop.

To me, in a big field AK is a drawing hand.  In a shorter stack or smaller field short-handed, AK is a TRAPPING hand (and sometimes AQ for that matter).

Sure, even in 6-max I treat UTG as UTG (nods to Lee Childs), but usually I am playing hands I might discard at a full table (AJ, the Cosenza, etc.).  And I will "float" more, but I am still not going to be stupid and bluff off large amounts of chips under the guise of aggression.
Posted by columbo (at eifco dot org) at 1:28 PM 2 comments: Links to this post 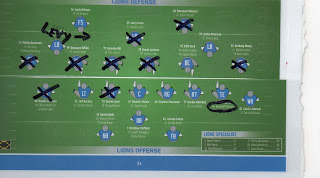 Why did the Lions trade for a DE last night?

Take a look at this diagram.  The Lions are on a 3 years plan, and a competent one.  I was critical at first, because I always felt you built from the defense up.  But in the pass-happy NFL, you have to build from the QB first.  So year 1 they assess their offense and grab their QB.  The use "talent fill-ins" on defense, determining their targets.

Year 2: they finalize their offensive based on year 1 weaknesses (Calvin being triple teamed was a big indicator) and fix the TRENCHES.  That is right, the priority was the TRENCHES.  Solidified LG.   Two BIG MASSIVE impact DT.  And SITUATIONAL DEs.  Speed rushers AND edge containment guys.

2011: The "back 7" will be finalized.  Everyone there this year, with the exception of Delmas, is competing for a 2011 job.  This includes the CB trades, Peterson, and the new crop of discarded safeties from other teams.

It seems worth stating that the Lions aspire to 8-8 this year.  7-9 will be disappointing, based on their plan.  9-7 would be something to be ecstatic about as it confirms that the moves to date have had a huge impact.  But rest assured, the Lions will be interesting instead of the doormat of the NFC North.
Posted by columbo (at eifco dot org) at 1:55 PM 1 comment: Links to this post

The flop comes 78Q with 2 spades (My kings are red). My opponent can have a wide range, but based on the limp call on the button, I am going to have trouble putting him on a hand. After thinking that only a Q will call, I decide to bet only $1000. This is light, but in a home game, c-bets and turn bets often fall into bad habits of "same size as last bet" traps, and I figured it would look like that.

After betting the $1k, my opponent raises to $3k. Here now is the dilemma:

You have a strong holding vs. a wide range at an early level. BUT, you have $2k in

In this case, he took control of the hand and yet I cant see him trying to "take it away" on this flop. Especially for that much of his stack. He also reached the tipping point first. Based on criteria, I should have seriously considered a fold. Yet because of stack size, I did not.

I really am thinking about this hard...
Posted by columbo (at eifco dot org) at 11:17 AM 10 comments: Links to this post

I took a surprise break from the grind for a week or two as my day job evaporated. Sure, I hired on knowing the goal was to sell the company, so I should chalk it up as another victory. But financials were disappointing in this market, and thus this IT executive is looking again. Hopefully, another growth company that needs scalability, technology, operation expertise, and above all needs a guy like me.

Job hunting can be mentally taxing (certainly isn't physically) and so I am very cognizant of my brain and moods at a given moment.

When I finally did sit down yesterday and play the $42k, I notice things again that I take for granted. Specifically, the period of a tournament where 50% of the field is gone until the 15% mark. This is where the M starts to grind away and the deep stacks portion of the tournament is coming to a close. You may have more than average when this begins, but if you play passive, you will be a short stack or flame-out at the 15% - 10% mark. It's the tipping point of an MTT and is only relevant in large fields, but online its a must have skill.

I am trying to work on skills that really work in this range. You cant force too much action, but you cant just "wait for hands" either.
Posted by columbo (at eifco dot org) at 11:20 AM No comments: Links to this post