Would you in today's day and age build the DIY table, or go for the all electronic table?

I, for one, am impressed not by the electronics, but the effort put into the software. Looks better than the electronic casino tables.
Posted by columbo (at eifco dot org) at 1:22 PM No comments: 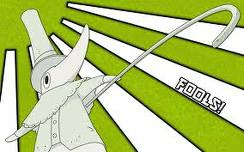 If there is one thing that always frustrates me about cash games, its watching a player spew chips and when I finally get a crack at the fountain, he draws out. But this is not a bad-beat complaint. No, rather my inability to spew small amounts of pre-flop chips in order to trap people with boats made with Q2o. Yet, across the table is a guy who saw 3 turns all night. Each time he had a boar. And each time the other player with a pair would keep betting into him and paying him off.

I remember now what I love about tournaments. You cant just sit there and spew chips hoping for the perfect flop one day.
Posted by columbo (at eifco dot org) at 9:25 AM No comments:

If you want to win a tournament, you have to win your share of races. Once again, I played well but went 0 for 1 in the results column. Avoiding getting my money in behind and not calling off with 44, got me to 13th (of 30), but was surprised when KT called my eventual all-in. He had 1600 in the BB and I moved in for only 8.5k, so its not awful. But he is very lucky there I have 99. King on the river and its over for me.

So much comes down to a big race. And I made two huge moves on pots with air just to get that far, so I cant hide behind being passive. I doubled up early (to 20k), but ended up having to release 3 hands in big pots over the next 90 minutes, that put me back to 12k, which forced the inevitable cliche.

You got to win a race. Especially the FIRST.
Posted by columbo (at eifco dot org) at 4:21 PM 1 comment: