Who's the U-boat commander?

Sarcasm. Its the only thing getting me by today. 4 tournaments, 4 times eliminated with my money in ahead. SnG where my straight caught a guy with two pair willing to call any size bet, including my monkey push. He caught the 4 outer.

Then in the 180, after a poorly timed bluff (I misread his holding), I was short stacked and managed to get my 88 all in vs. 44. Never got past the flop. My own fault for bluffing at the wrong time, but I should have been able to recover.

so now I ask you. I MUST be doing something wrong. Its just really hard to figure it out when you are getting your money in ahead. I must look DEEP.
Posted by columbo (at eifco dot org) at 10:47 PM 2 comments: Links to this post

Who ordered the burly beef?

Ya know, I would like to be angry today, but I guess I resign myself to the fates. I played a 180 and the 30k yesterday, both with similar results. I finished 45th in the 180k when I gave EVERYONE A FREE CARD after the flop, when after carefully sizing my bet with TPTK, I accidently clicked on CHECK. The bottom pair player hit his second card on the turn.

In the 30k, I managed to hang around average for 2.5 hours. There were about 300 of the original 1500 (yup) left and I realized on the turn that the other guy was pushing with a the nut flush draw because he was behind. I set him all in and needed to dodge a single club to double up and be sitting way above average. All my chips as a 3-1 favorite when I already have a good chunk of them in the pot? Everytime baby. Forget that survival stuff, I'll take 3-1 EVERY FRICKIN TIME.

But at the end of the night, all I could do is ask, "hey, who ordered the burly beef?"
Posted by columbo (at eifco dot org) at 7:11 PM No comments: Links to this post

So just as I complain I can no longer play poker, I get dragged back in. A HORSE tournament hosted by the ANTE-UP podcast. Since my Columbo segments have moved over there, I have been trying to play all the events. Through 7 of them, the best I could muster was a 9th.

But HORSE requires a lot more than luck. Plus its all limit and its a value betting game. It requires minimizing risk and playing big pots with big cards. That's what I do to a fault.

# of those tournaments that I cashed in = 1.

Just what does THAT tell you? That I don't play tight when I need to. More to the point, I dont slow down until I LOSE a big hand.

I need to READ situations better. I wish FT had the time bank like PS. (although I think you should have to manally initiate it so that it does not kick in for diconnected players).
Posted by columbo (at eifco dot org) at 2:55 PM No comments: Links to this post

I am frickin Nostradamus (online poker is illegal thread)

If you read my blog for a while (yeah, right), remember this gem?

Point? well, let me digress a bit and make another one. Party Poker is going to ruin everything. When they took their poker site public, they added the pressure of growth revenues. That caused the company to look for more ways to generate growth (income). They introduced blackjack and side bets. And that's gambling. Its not game play based on skill, its plain gambling. And it marks the beginning of the end. Soon we will see the negative backlash that comes with gambling, then regulation based on the lost tax revenues, and then decline of ease of online play, then when the boom ends, the brick casinos start to offer less card room space.

These things swing like pendulums and if you don’t believe it, then you're simply too young to have seen it all before.

That was November 13th, 2005. It took 11 months for it to come true, but I still think that was the turning point. And its why Full Tilt lost its bid to have poker regulated as a separate entity from other gambling.

So, the landscape is changing and just as having poker as a hobby was beginning to wane for many. I already expected that the WSOP next year would NOT hit 10,000 players as many are saying. Now, it seems we start to find the ceiling. Just like the stand-up comedy boom in the 80s, or the MAGIC card playing in the 90s. Whatever it is, it peaks and then finds a regular audience. I would not be surprised if the WSOP is less than 8000 players next summer, would you?? Really?
Posted by columbo (at eifco dot org) at 9:55 AM 3 comments: Links to this post

Played 6 handed and was in the top ten for a while. Then my KQ flopped TP and lost 2/3 of my stack to AK. I was crippled.

The new big stack, then gets sucked out on at he river and is back to an average stack.

This player now looks like he is tilting when he pushes all-in pre-flop on the very next hand to a EP 3x raiser. But what's this? I have AA.

I call, as does the EP player with JdQd. And watch the fireworks... 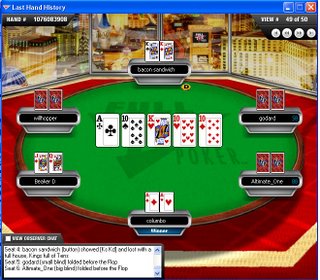 And as the cards come one street climax after another, all we can do is gape and read our fates.


I later lose another hand with TP KQ vs. AK but was still 10th overall at that point with 24 left at the break.

"I always defended you Razz. When people used to say, 'Hey, there goes Razz the loser', I would say, 'You just dont know Razz'. Well you know something Razz? Maybe they did know you".

ARGH. I practically double up on the first hand and then go on a rock catching tear that could out score Terrell Owens. A23 turns into a BOAT. Over and over again my junk gets kicked as with the legendary scriptures of blogger junk kick receiving.

I went from first to second one out on all good start hands, mostly with a decent draw on 4th. And old story, told by a fool.


ARGH
Posted by columbo (at eifco dot org) at 9:54 PM 2 comments: Links to this post

"I always defended you Razz. When people used to say, 'Hey, there goes Razz the loser', I would say, 'You just dont know Razz'. Well you know something Razz? Maybe they did know you".

ARGH. I practically double up on the first hand and then go on a rock catching tear that could out score Terrell Owens. A23 turns into a BOAT. Over and over again my junk gets kicked as with the legendary scriptures of blogger junk kick receiving.

I went from first to second one out on all good start hands, mostly with a decent draw on 4th. And old story, told by a fool.

Twisting in the wind with Omaha

Played PLO on Saturday in the ante-up tournament. Was doing very well (top 10 the whoe way) until the blinds started forcing us to gamble more. As my stack dipped below average, I got my money in post-flop as a 2 to 1 favorite and the opponent hit his redraw when the board paired on the river. Ouch. PLO is hard.

I played in the WPBT O8B event which turned out to be about 20 players. I was doing well with 9 left and let is slip away, bubbling out in 5th. I lost a big hand to StaticKling but a more painful loss was losing a couple of big hands to the luckbox. He was on my left, and there was one hand that I actually had to freeze, go back to the hand histories and figure out where I blew it. Turns out I did not blow it so much as lady luck uses me as a scratching post. As does luckbox.

I was surprised over the last two weeks that I had this strange aversion to games other than hold em. I did not want to play a game where I was a rank beginner. Yet I played well in each of them, getting my money in ahead a majority of the time.

So, we'll see if I get to continue this hobby based on the internet gambling rider on the safe harbour act. We all know that shipping goods with contraband or lethal bombs in them is very similar to play $1/$2 internet poker and therefore I must respect the opinion of my government which, in its wisdom, knows what is best for me.