I said I would do this, and here it is. A detailed Synopsis of my cash last night. You already saw hand #1... Now a look at the rest of the important hands:

II. I am short-stacked with 1/2 the starting stack size. (I bled a bit after hand #1). I now have an opportunity to pick up 500 chips simple with a push and the hope that I am not running into KK or AA. But the upside is to increase my stack size by a third. And it works. 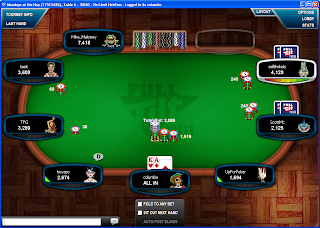 III. I now finally get a big hand in KK and put in a re-raise preflop which is called by Hoyazo. Trouble? The flop is very friendly for a big pair and Hoyazo pushes. I am actually suspicious based on this and assume my KK is good. I did not count on running into AA. NOTE: This is almost the exact same scenario as in hand one, only this time I CALL the bet. And I am WRONG again. 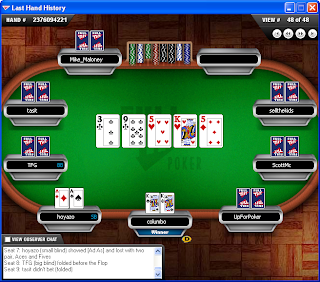 Here is a hammer raise. This will be one of the SEVEN hammers I get over the course of the tournament. 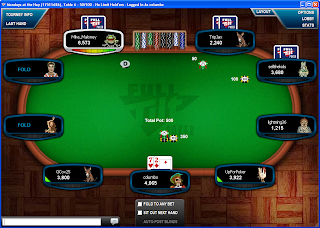 IV. The next hand is a weird case where I was the first raise into the pot and was called by a dominating hand out of position. When the flop hits me hard, the AK is flying into trouble fast. Based on the flop and my weaker stack, he thinks I have victim written on my face and pushes me all-in. Needless to say, I call and for the first time, have a decent stack size. 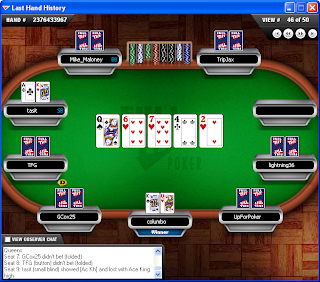 V. Here is a hand where AA limps from EP looking for a raise to allow him to re-raise. Another player limps and instead of what I would normally do with the hammer, I simply check. (I want to play this like I hit the flop.) Expecting to bluff, the flop rains down like a box of hammers hitting me HARD. AA cracked and I double up. 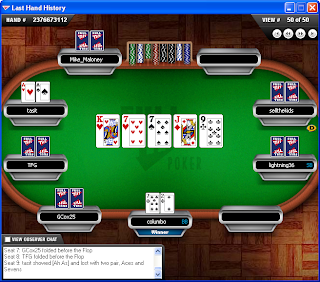 VI (x3). As the tournament rages on, I have an Q of about 1.5 and I make some blind steals with hands like AQ. Nothing to write home about...

But I am also playing INSANELY tight if I am not first in. For Example, I FOLD AQs on the button to a raise (full table), I fold 88 UtG (16 players left now), and fold 22 to a short stack all-in from UTG because I am only in Mid position.

I am also not defending my blinds. A by product of this is that I am keenly aware that with 16 left, people are watching each other. I believe that people think that they can steal from me. I think Miami Don tries just that. He is first in from the cut-off and pushes all in. He has about 25% of my stack. I have A7. In the past 3 rotations I folded to every push and I am worried about the table running over me. I decide I need to show that I will make this call to the others at my table. I call and Don is aghast. He cant believe I called an all-in with A7o. But reasons are reasons. Plus, I think he WAS making a move with any Ace. I knew it would be a close decision. 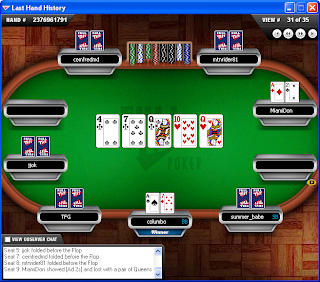 VII. When there are 14 people left, even though you are 7 handed, don't get into kicker problems... This was a much more difficult decision than its looks like here, because he is better every street and I am calling... 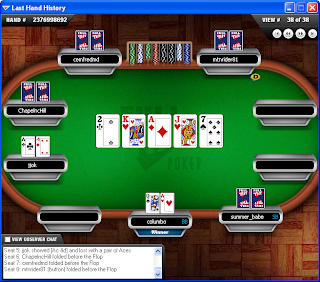 VIII (x3). Continuing with the theme of being overly tight with 12 left, I would take call raises with AK, but fold if I missed the flop. Which happened all 3 times. Why? Because it was the GIANT stack at the table betting. But I could win a big pot if I hit it. 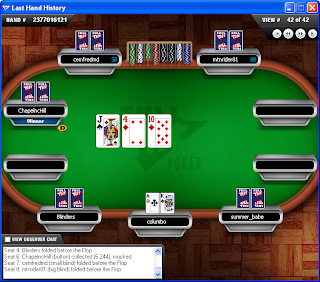 I just never hit a flop with AK late in the tournament.

IX. 12 left, 6 handed and I tangle with TAG Iggy. He is capable of some complex moves, especially sensing and raising into weakness...

IF you believe he might have had a OESD, that is one of the cards that makes the hand.

I go into the tank, but eventually fold.

I would like to list this as a great decisions, but in actuality, no decisions on my part occurred. I folded out of a hand on the bubble (2 left to cash) and 3 players got all in. Lucky for me, the biggest stack won and just like that I cashed. Having made really only 9 decisions the entire tournament. 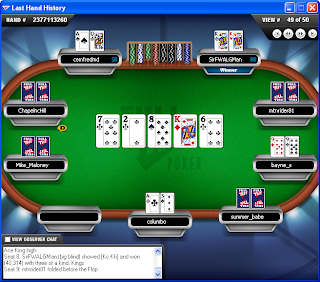 X. Turns out the difference between 6th and 4th was that someone did not pick up on a potential mistake I made. I saw a flop from the SB with JT and the flop was Jh2hAs. checks all around and the turn is the 4s. Now I bet and the other player folds. I am willing to bet that many of you would have put me on the J. You probably could push me off of this hand...

IX. Then end. 4 handed and I defend my BB with 2dT2 against the UTG min raise. The flop comes 238 rainbow and if I think he has two big cards, I might try something here. Noticing that I am also the short stack now, I decide to try and steal it with bottom pair and push. He calls with QQ and IGHN 4th.

So there it is, a Hoy in 9 decisions. In order to win, I probably would have had to make 9 more. Most of the hard ones are at the end...
Posted by columbo (at eifco dot org) at 2:37 PM